Bliss - our Boulder Guide Dog for the Blind Puppy!

Despite being a military brat (and moving every couple of years), I was fortunate to have puppies/dogs in my life at various times growing up. Plus most of my siblings have dogs. Due to a variety of issues, we've never taken the puppy plunge ourself ... although my youngest son Kyle had asked about getting a dog. One of his baseball teammates has raised a puppy for Guide Dogs for the Blind - here's the local Boulder chapter. The Mom is an enthusiastic advocate for the program (she's on her 3rd puppy!) and described how you get an 8-week old puppy, raise it for a year (lots of training!), and then you have to give it back (sob/cry/sob/cry) ... and it goes to "Doggie University" for several months, and if it does well, is then paired with a blind person.

Kyle was excited to do this ... even after I asked/said a bazillion times if he was going to step up to do the work associated with raising a puppy, especially one that requires extra training. Her assured me he'd try his best, so I said "OK" ... and then after some "discussion" (not everyone else in the family was as gung-ho! ;-), we attended some meetings, had our house inspected, and upon returning from a week long trip to California, drove straight from the airport to pick up Bliss. She's one of 4 puppies from the same litter - they named 'em all starting with "B." Bliss was born on June 13th, 2018 - more info here.

Kyle with Bliss the day after we brought her home on August 7th, 2018

Bliss taking a nap (listen to her snore!) ... with Dad about to take one also - she's a lot of work!

September 4th, 2018: Bliss loves to LEAP off the patio onto the grass

I actually took the picture (and the one above) by myself. A bit of a challenge as one has to have the camera framed & focused with flashes ready to go ... and use the handheld remote to fire it. And oh yea, one semi-cooperative puppy ... some kibble helps incentivize her. LOL she grabbed the camera strap after the last shot and started dragging it around the yard! ;-)

October 11th, 2018: Bliss first big outing as she spends half a day at Kyle's High School - funny writeup
Challenging for me to to take this picture with my iPhone as she is ALL BUSINESS when in uniform

Needless to say, Bliss had a BLAST running around in the snow!

And runs off with the pine cone ... but then looses is mid-stride! ;-)

A Boy and his Dog having fun in the snow

My Mom sent this hilarious card to my wife for her birthday! ;-)

Bliss at Christmas with the "Pick of the Litter DVD"

Bliss is 45 pounds (triple her weight when we got her) at the New Year!

I volunteer to help low-income people do their taxes - Bliss is my assistant! ;-)

It's pretty tiring filling out all those Form 1040's and Itemizing Deductions! ;-)

Bliss at 9 months and 55 pounds

Kyle with his "girlfriend" Bliss for High School Graduation from Fairview on May 19th, 2019 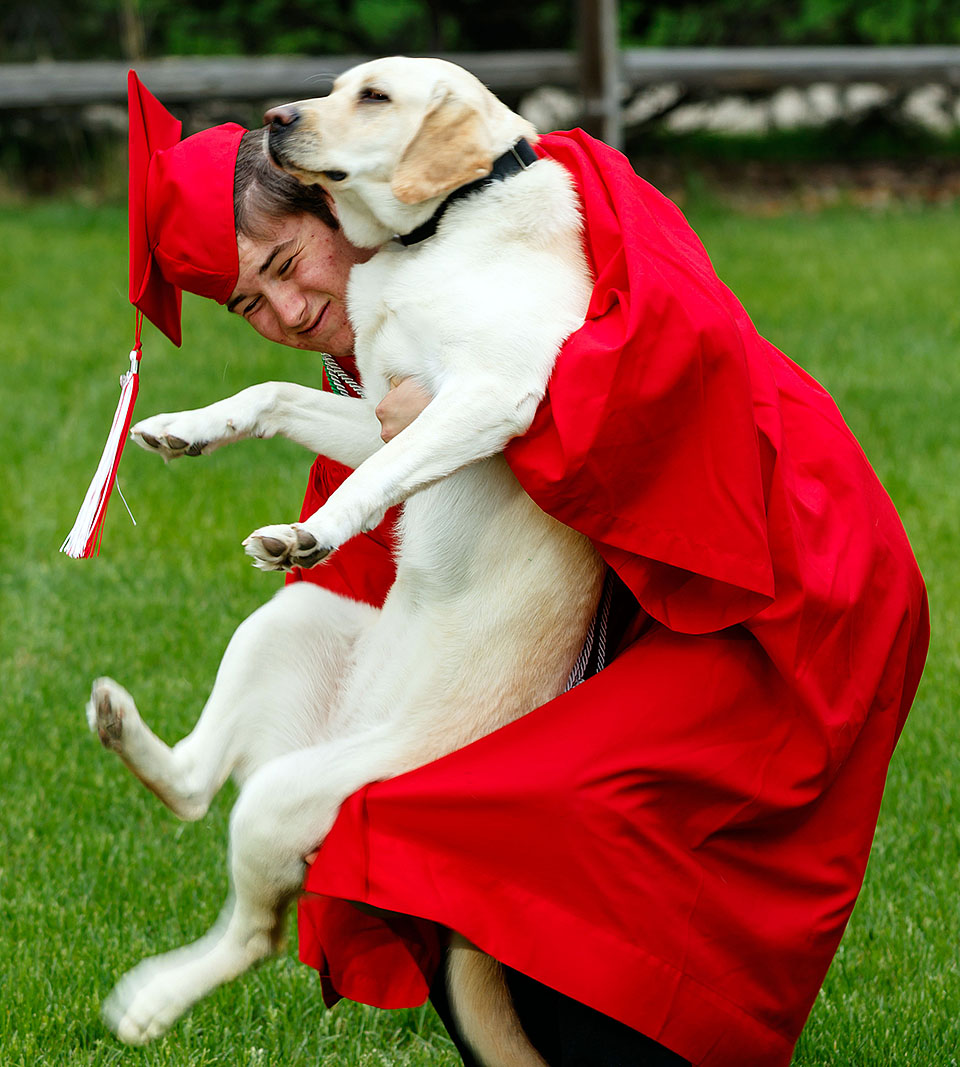 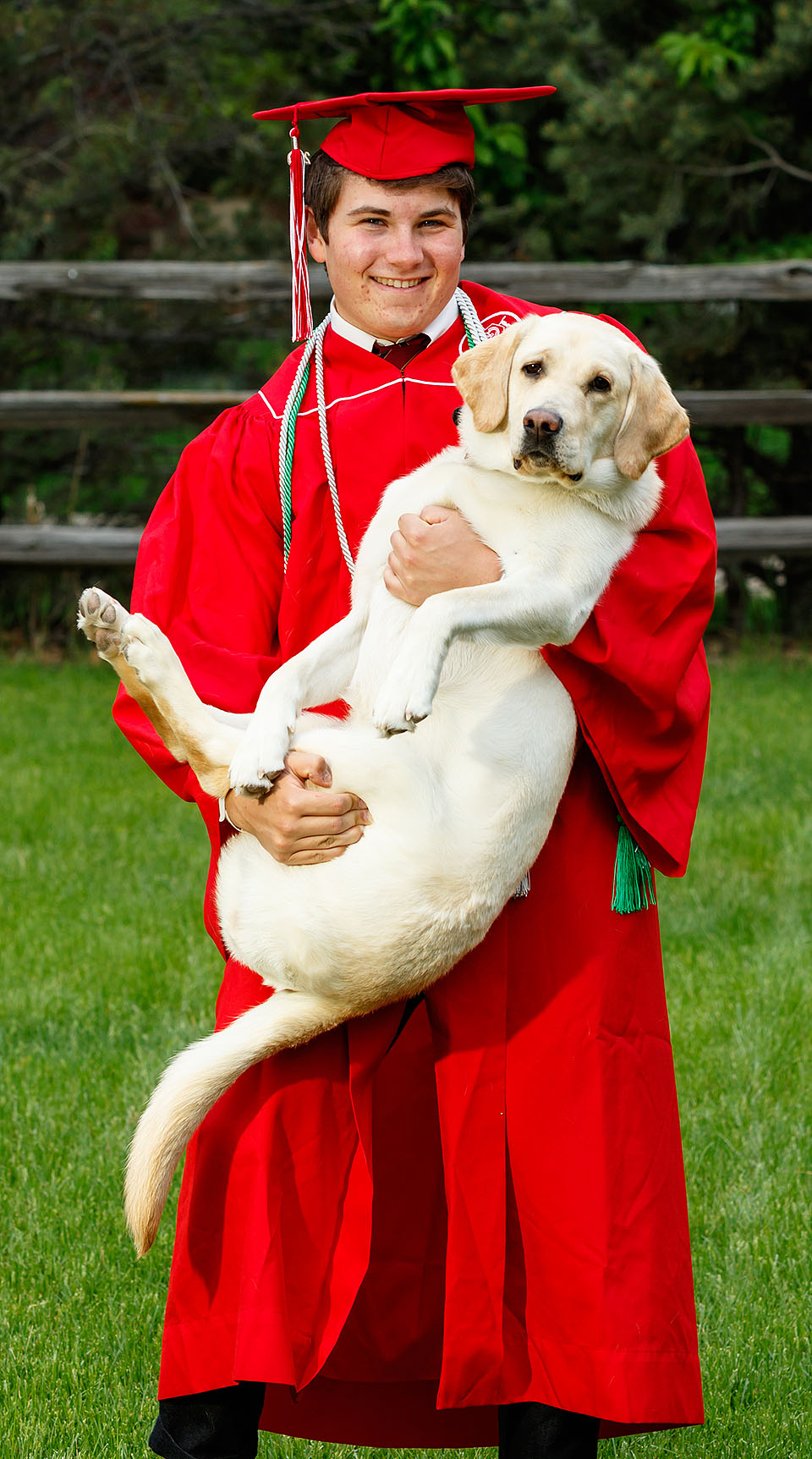 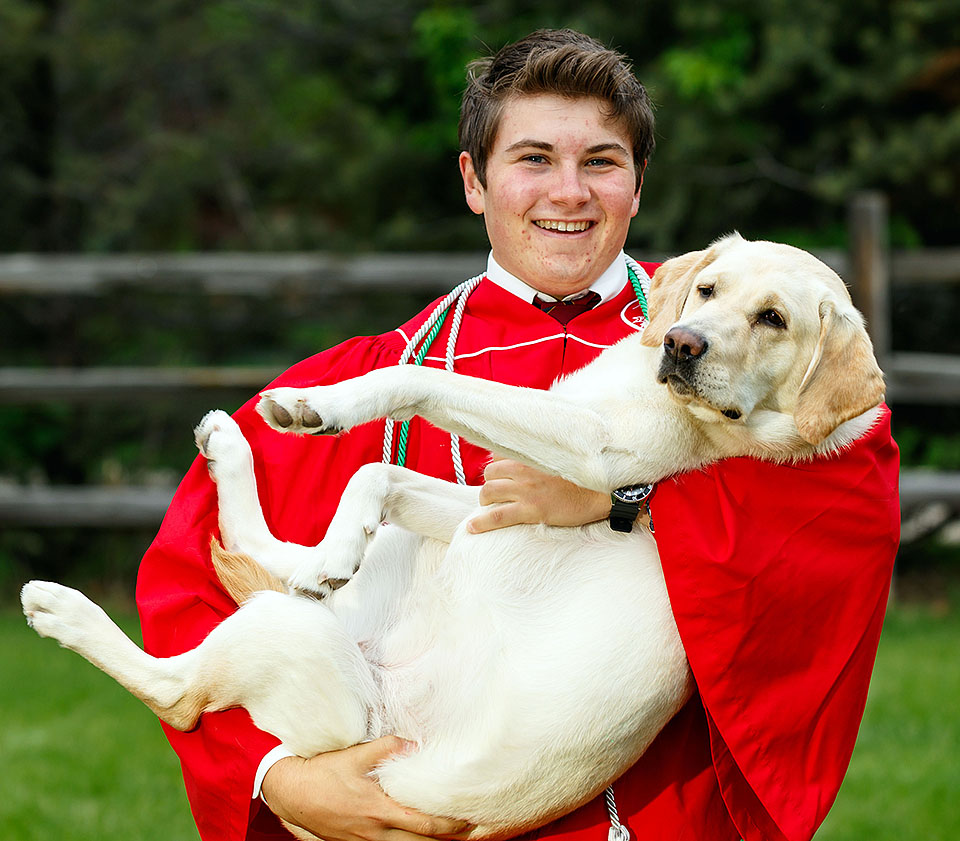 A Boy and his Dog

As you can imagine, the standards to be a Guide Dog for the Blind are high (as they should be) ... and turned out Bliss was not quite good enough to make the cut - darn! So she was "Career Changed" ... and while GDB was debating what to do with her, out of the blue, they asked if I was would like to keep her ... which is highly unusual. Since our youngest had just gone off to college, we are looking forward to transitioning to be "Empty Nesters" ... so we just could not take on that responsibility.

However, some neighbors (who I actually didn't know that well but are a great family) had always been super helpful when I was training Bliss, especially their 9 & 11 year old girls. So when I called up Michelle, the funny conversation went something like this:
Alek: "HEY, I have a question for 'ya about Bliss."
Michelle: "Oh we love that girl, do you need some help with some more training?" (but wondering why I am calling her! ;-)
Alek: "Welllll ... not quite ... but would you be interested in having her as your dog ... permanently!"
Michelle: LONNNGGGG silence (she is British and later said she was "gob-smacked"! ;-)
Michelle: "Our whole family loves that girl - are you serious Alek?"
So after some paperwork, Bliss has a new home. We are delighted that she ended up with a wonderful family in the neighborhood as it's such a win-win for them and Bliss ... and us too (!) since we get to see her periodically which makes us feel like "Grandparents" ;-)

Misc. videos from the Bliss-Cam:

BONUS: Some videos of Bliss with her siblings before we got her: 1 day - 1 week - 1 month