We've been fortunate to have a couple of peaches trees in our backyard which have produced an amazing amount of fruit ... but on an every other year cycle. 2012 was the biggest year yet ... as we had thousands (!) of peaches start out on both trees. We did two rounds of pruning, but still easily ended up about two thousand ripe peaches which resulted in a few more broken limbs.
2014 update at the bottom ... a "few" less peaches - D'OH! ;-)       Bountiful harvest in 2016!

Alek, Dirk, and Wendy showing SOME of the unripe peaches from the 1st pruning

The bunny rabbits enjoyed the peaches - mouseover to see 'em in action ... and watch a video of 'em!

An occasional fox would also come by ... although never saw 'em when the bunny rabbits were there!

Various pictures of a Wasp that came in the house to enjoy some peaches!

I gave the wasp a slight nudge with a kitchen knife

Peach trees on July 30th ... sagging a lot with two weeks before picking

With over a thousand peaches (and some up quite high), here's how we pick 'em!
Click here to watch a time-lapse of the peach-picking ... good comedy!

Luka was a great help

Peaches are stacked all over the house!

With several hundred pounds of peach remnants rotting in the trash, it smelled pretty nasty!

All peaches picked by August 26th ... as some balloons drift over the trees early Sunday morning 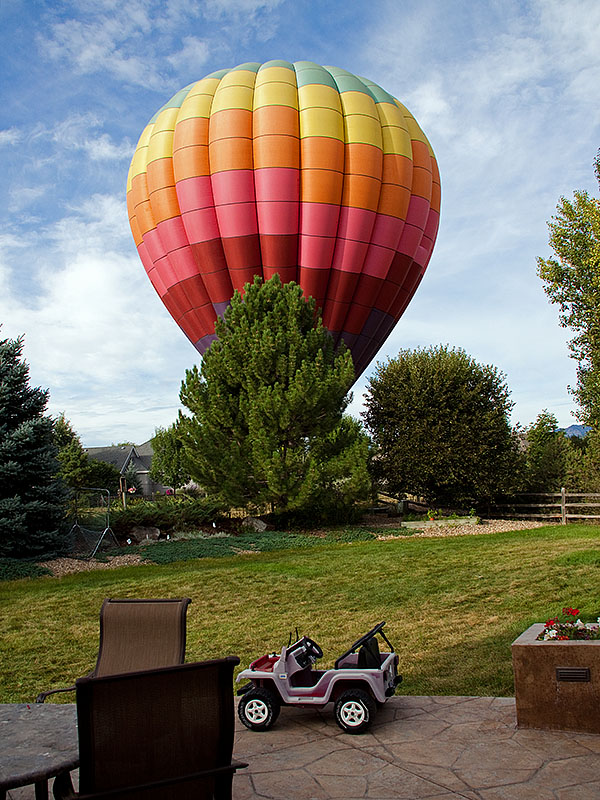 Peaches come in various shapes & sizes ... I called this one a "Rhino-Peach" ;-)

Peach Notes: Even though we did a massive amount of pruning, we should have done more as I had several broken branches. But HEY, the Franken-Tree keeps producing fruit, although I'm sure its days are numbered ... so similar to 2002 (when we had to replace the tree on the right), we may need to eventually replace that one.

I like really ripe peaches ... versus the so-called "fresh" ones you get at the farmer's market which are actually picked a few weeks early for transport - there is a big difference in sweetness! So I wait until several dozen were falling a day - note they are useable despite being bruised. The "big shake" was on August 14th (took a half hour) and I use this approach rather than hand picking so the "ready-to-fall ones" are captured ... with many still left on the tree for further ripening. As seen in the video, it's good comedy as the tarp holders are "bombarded" by peaches. And yes, we get a lot of bruised peaches, but those are diced up first ... with the semi-unscathed ones dealt with in a few days.

As seen in the pictures, just about every flat surface in the house is taken up by peaches laid on top of newspaper. I check these daily to see if any have "melted" (going rotten) and move 'em to the dicing area - tossing 'em if really bad. Wendy ROCKS on the dicing ... and new this year is we added ~4 ounces of a sugar/lime solution to some of the frozen gallon bags per my Mom's suggestion. This is a quart of water, a cup of honey (we needed to use it up - sugar would probably be better) and a Tablespoon of lime juice. In years past, the peaches rapidly turn brown when defrosted 6 months later ... so hopefully this will help.

After the "big shake", there are still hundreds of peaches on the trees. So after about a week of picking up ones that are falling, there's a smaller shake which reduces the number left on the tree down to about a hundred. More dicing, etc. ... and a few days later, I hand-pick the last of the peaches.

In addition to freezing all the peaches (over a hundred pounds), Wendy is eats a huge bowl every day for a couple of weeks plus I make peach ice cream (and other concoctions) while they are fresh. And because we still have wayyyy too many to consume ourselves and/or freeze over the short two week time span, we gave away easily over 500 peaches to friends.

Our apple tree also had a bountiful crop ... so we had some fun doing some Smashing Apples! ;-)

After the 2012 MEGA Peach Harvest, we had ONE peach in 2013 ... but we seem to have been on an every-other-year cycle. So I had high hopes for 2014 ... but I think a Mother's Day frost clobbered the trees ... so we got zippo from the "Franken-Tree" and not even two dozen from the younger tree.

Wendy had bought me a "peach picker basket" (see image below) and this was pretty handy as almost all of them were very high up on the tree. It worked great if the peach was on a branch such that I could get the basket underneath and pull it away using the tongs. But some were buried between branches and when I tried to get 'em out, they fell on the rocks - D'OH! ;-)