Dirk wins a "Sweet Suite" to the Colorado Rockies

The Denver Post has a contest where people write stories about why they love the Colorado Rockies ... and the winner gets a "sweet suite" for 12 people at the Saturday, July 11th, 2009 against the Atlanta Braves.

Dirk is a HUGE Rockies Fan so he spent a ton of time writing up his entry - also see at bottom of page. He showed it to friends and family who had minor edits, but it's pretty much all his words and work - "I'm a lousy writer - over 7 hours in front of the computer!"

Since submitting it, Dirk has asked me almost every day since the July 2nd deadline if they have announced the winner; zippo on their web site. But on Tuesday, July 7th, I got a phone call from GeriM saying Dirk won!

So after picking him up from baseball camp, we sat down for a bite to eat while Dirk read the paper - sports section of course. Watch the movie as I "surprise" him with the news - Wendy knew what was coming, but neither Dirk or Kyle did.

The excitement at the end of the movie continued to grow as he called up everyone he could think of about the good news. He's totally on cloud 9 and we look forward to seeing the Rockies (win!) this Saturday. ;-) 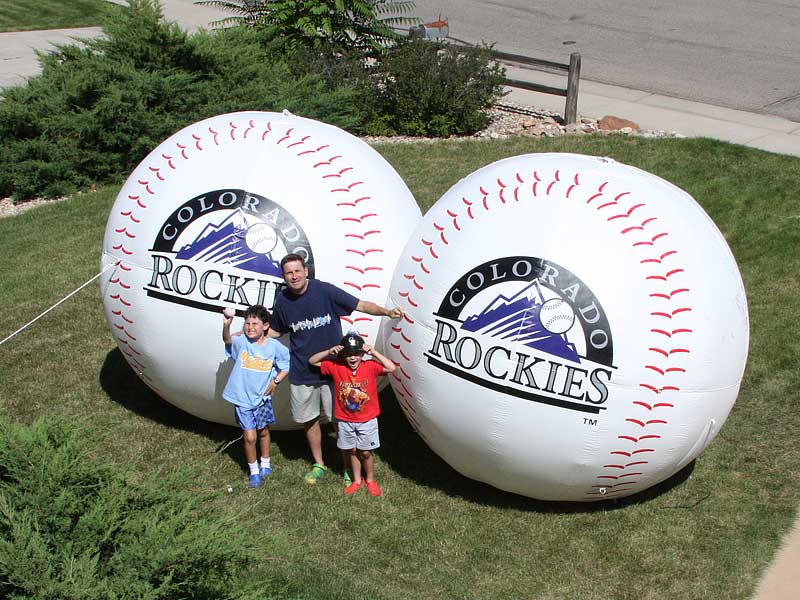 I am an 11 year old die hard Rockies fan named Dirk. Ever since the Rockies magical 21-1 run in 2007, I've watched over 150 games heading into this seasons All-Star break. I've watched almost fifty games so far this year! My favorite player is Ubaldo Jimenez.

One reason why I love the Rockies and Ubaldo is that they work together as a team. If there is one thing that is obvious about the Rockies, it's that there is no "I" in "team". A great example is when the Rockies lost to Tampa Bay on June 16th, 2009 to end an 11 game winning streak - nobody was pointing fingers, and they realize that it's only a game.

I respect the Rockies because of their donations to goodwill. I think that as a pro baseball club it's important to give back to the community. Colorado Rockies staff and personnel know that there are people out there that aren't as fortunate as they are. Many kids love the Rockies but don't have the money to get tickets, so the Rockies provide them to the Boys and Girls Clubs. They also give many tickets away to people who otherwise could not afford to attend.

When I go to a game I love soaking in the magic that so many players, fans, coaches, and workers have left behind. Many people when they think about ballparks think of Fenway or Wrigley Field. Coors Field has its own amazing history such as when the Rockies first started playing there in 1995, the 1998 All-Star Game, and of course, the 2007 World Series.

My love for the Rockies extends beyond the (TV) couch and bleachers to my memorabilia and memories. I have two giant inflatable baseballs that were used on Opening day 2000. I also have an autographed baseball signed by 12 Rockies including Ubaldo Jimenez. My favorite memory is October 1st, 2007 when the Rockies won the NL Wild Card Tie-Breaker game over San Diego to advance into the playoffs. As you can see I've got a lot of passion for the Colorado Rockies.

My Grandpa Larry is visiting from Florida the 2 nd week of July, so if I win the "sweet suite", I'll take him to the July 11 th game versus Atlanta for his seventieth birthday.