Closeup of the new grill in place and hooked up to my natural gas line - she's a beauty!

I had to order online since no local Costco's had it - 226 pound delivery!

Here's the obligatory unboxing ... of a pretty darn big box! ;-)

Here's the Costco webpage about the grill with description/specs

First, this grill is actually made by Nexgrill Industries under license to KitchenAid. From what I can gather, Nexgrill is an importer as I believe all their grills are made in China - they provide various models (often with semi-unique model numbers with presumably low production runs - mine is serial #491) to various "big box" stores such as Costco, Home Depot, Lowes, Sam's Club, Sears, etc.

There are a variety of complaints online about Nexgrill (poor grill quality and crappy customer service), but I'm a fairly handy guy, so figured I'd get the well spec'ed out grill for a decent price and be able to fix any issues that came up. Plus Costco has an AWESOME return policy ... although I wasn't sure if they would actually accept a 200+ pound BBQ Grill getting rolled back into their store ... but per story below, they do! ;-)

The actual specs of the model 720-0856V is six 10,000 BTU burners in the 698 square inch main grilling area (plus 214 square inch warming rack), a 13,000 BTU ceramic rotisserie rear burner, and a 15,000 BTU ceramic searing side burner - that's a lotta heat and you can grill a lotta hamburgers at once! It's mostly stainless steel construction (some the better 304 grade), although disappointing that the cooking grids are "wrapped" versus solid stainless. I also wish the main firebox was thick gauge 304 stainless (or cast aluminum) ... but getting all that in this size of grill would cost you about $3,000. Overall, it was put together pretty well and assembly was easy.

Converting from Propane (LP) to natural gas (NG) was pretty straightforward as the directions in the KitchenAid 720-0856V manual provide a good step-by-step. The main burners have "LP orifices" ... so you just take those off. NG doesn't burn as hot plus is under less pressure, so you need a larger opening - very clever design. You have to swap the (included) orifices for the side and rear burner - the later is a little trickier than as described in the manual - see below.

I pulled out my Maxsio MS803 Infrared Thermometer (which will measure up to 1,922°F!) to check the temperatures before/after the conversion. I cranked all six burners up to full, and recorded temperatures at 5, 10, 15, and 20 minutes. Using LP, the grill thermometer showed 400/600/700/750 and measured grate temperatures were 450-500, 550-600, 600-650, 600-650. This is actually slightly less than my old grill, but I had drilled out those orifices. After converting to NG, similar temperatures were observed. The searing side burner gets crazy hot - in less than 5 minutes, I was seeing peak temperatures of over 1,600°F! ;-) However, the cooking grid itself doesn't get that hot, so I've actually tried putting meat on the lower fine wire mesh for searing. Also, this burner can blow out in a slight breeze, so be careful.

Measuring the temperature of the searing side burner - that's HOT!!!!

After swapping the orifice, the rear rotisserie is glowing a nice hot cherry red

Running LP after converting the left 3 burners to NG - fire in the hole! ;-)

The BBQ Grill will never look this clean again! ;-)

"Combat" BBQ'ing in a hailstorm (there was a nearby Tornado) - videos here and here! ;-)

Will need to run a burn-off cycle ... but nice having sooo much room that only half the grill was needed 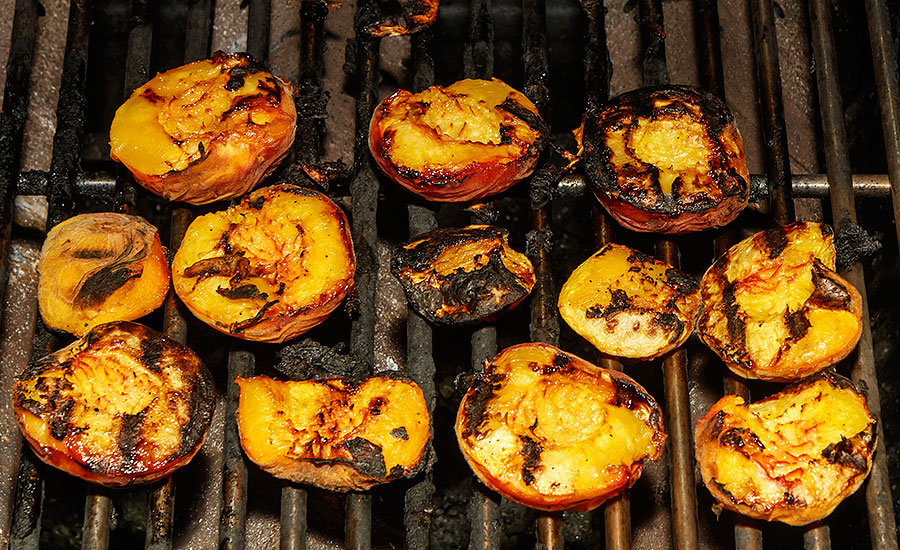 So on July 1st, 2016, I was walking into Costco and see some dude pushing a huge/heavy Nexgrill BBQ into Customer Service. Turns out he bought it 6 years ago and converted it from Propane to Natural Gas by swapping the orifices. 3 years later, he moved and needed to convert it back, but had lost the original Propane orifices. He contacted Nexgrill to try to buy the orifices ... and their customer support was TERRIBLE. He ended up writing a letter to the President of Nexgrill basically saying WTF can't you sell me the orifices ... but if you don't, I'll have no choice but to return to Costco ... and Nexgrill said go ahead. We agreed a new set of orifices should be about $20 and it was crazy that Nexgrill wouldn't sell it to him. This dude impressed me as a very reasonable person who doesn't abuse the Costco return policy - he just wanted a working grill!

Also, his job is actually selling Pentax cameras to Costco, so he knows full well that if a return comes back to Costco, they pass that on to the merchant. So at Pentax, they try to avoid returns by ensuring customer satisfaction. Again, both of us thought it was crazy that Nexgrill would not only end up eating the cost of the returned BBQ, but also damage their reputation and relationship with Costco. BTW, the Costco folks said it's pretty rare a BBQ is returned - about once/month - but they took it with no hesitation - impressively consumer friendly return policy!