13 years after the initial diagnosis, we find out that the The Celiac Diagnosis was a false positive - WOW!!!!
Fund-raising Update: I've partnered with the Center for Celiac Research and have raised over $83,000 for their research to find a cure via various zany offbeat fundraisers such as the Hulk'in Lemonade Stand and my Halloween Decorations & Christmas Lights - yea, you read that right - christmas lights - go figure! ;-)

After a LOT of health issues, my son Dirk was (finally) diagnosed with Celiac Disease, which is an intolerance of gluten, which is in barley, oats, wheat, etc. This is not a food allergy, but an autoimmune disorder (like diabetes), so it is not something you grow out of. As you can guess, there is a LOT I could write about our trials and tribulations with this (spending 4 days at Children's Hospital for "failure to thrive" is no fun), but fortunately most of that is behind us now. There is currently no cure for Celiac Disease, and you "treat" it by watching your diet very closely and avoiding ANY contact with gluten, which unfortunately is in a surprising number of foods/drinks.

If you are interested in more information, check out this excellent article by Dr. Fasano at the University of Maryland from the August/2009 Scientific American. There are also many local Celiac support groups - here's some pictures from the 2008 Summer Picnic with the Boulder County Celiacs - sure is nice to just tell the kids - "you can eat anything!"

We had a second son Kyle, and when we started feeding him food, he lost some of his appetite and got crankier, so we had a blood test done, which didn't come back conclusive (medical science is sooo grey) but rather than have a biopsy (this is considered the "gold standard" test and was done on Dirk), we decided this was enough evidence that he probably has Celiac Disease also. And it's not much work to stay on a gluten/wheat-free diet for a second child - the only bummer is we don't keep any of this in the house, so Dad doesn't get buns with his hambugers and things like hot cheese sandwiches (or wheat things) never tasted so good when you haven't had 'em for 6 months! ;-)

Unfortunately, Celiac Disease is a rather common malady, although there is a growing awareness how truly common it is. So the best thing we can do is continue to get the word out, so those afflicted can know what they have ... and hopefully spur further research into an eventual cure ... so when my boys grow up, they can eat pizza and beer! ;-)

We actually got written up in a few newspapers, the first article is mostly about us, and the second talks about cooking for Celiacs and Women's World wrote a fairly dramatic piece although maybe over time, I had forgotten how tough it was early on and have gotten used to things. On a lighter note, my brother's family was written up in a pretty funny piece about good eating manners for kids ... so I guess the K-Krew gets around at the dinner table! ;-)

Again, we have seen numerous articles/studies over the years that show that Celiac Disease is much more prevelent than thought and often either undiagnosed or mis-diagnosed ... it still surprises/disappoints us to talk to medical professionals who have little knowledge/awareness of this condition, although it's getting better. While the biopsy is a bit invasive, the blood tests for it are getting better and getting diagnosed is the first step. As mentioned, there is no cure short of going on a strict gluten/wheat-free diet ... but hey, low-carb diets are the rage these days anyway! ;-)

I just hope that a cure will be found so that when my kids grow up, I can go out for a burger and beer with them.

Dirk and Kyle looking good ... with their Big Green Buddy 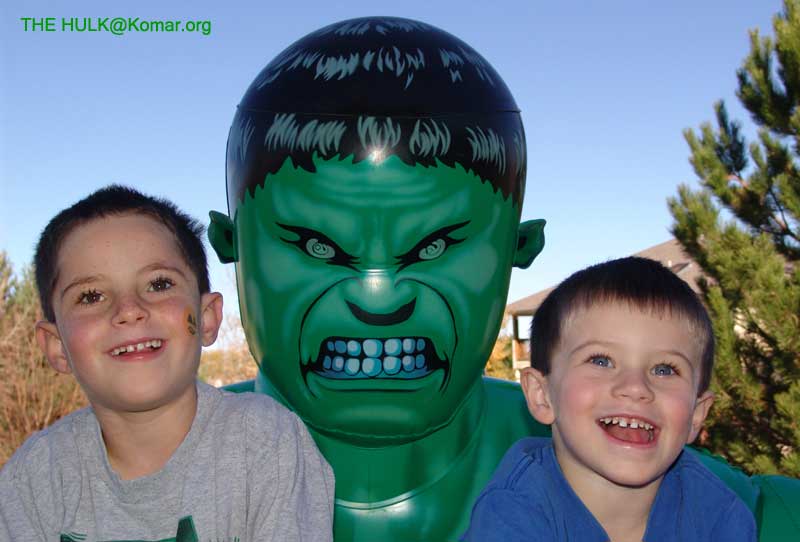