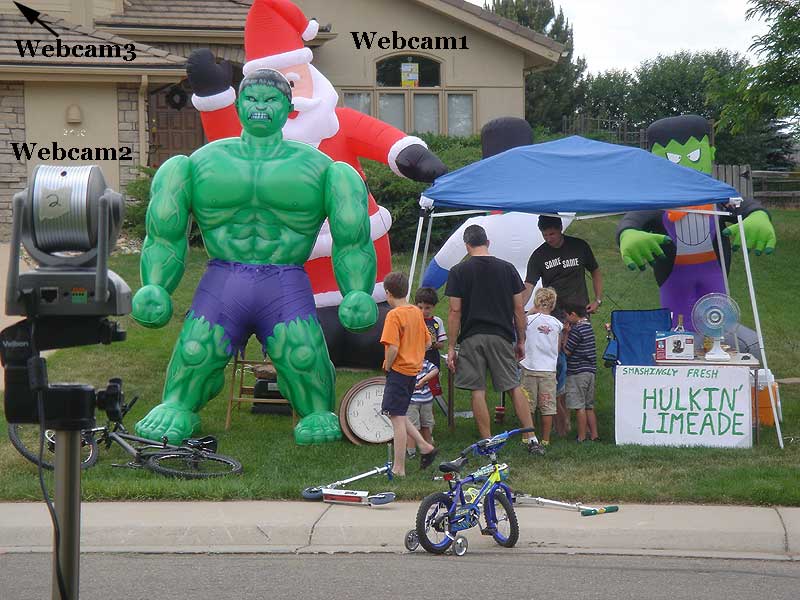 Lemonade stands are a ton of fun in the hot summer months, but not everyone has a nearby neighborhood with kids to put 'em on. But thanks to modern technology, you can watch a Lemonade Limeade stand via three live webcams starting at Noon MDT (GMT-6) on Saturday, June 10th, 2006 with all proceeds going to charity. You can not only watch the action, but also use the X10 powerline control technology to inflate/deflate the monster inflatables via the Internet. We won't be serving Puny Human Powder Limeade - we'll be juicing smashing fresh limes, and simply adding sugar, water, and ice ... with an optional shot of Tequila for the big kids.

The Hulk'in Limeade Stand is now closed and the kids (Dirk (8), Kyle (5), and Alek (42!)) had a great time. Dozens of comments on the lemonade blog as Internet surfers enjoyed the show and chimed in. Complete time-lapse video is available from: webcam1 - webcam2 - webcam3. Finally, $406 was raised for Celiac Disease Research - thank you everyone that donated.

Misc. Updates on the Lemonade Stand

2006/06/03: Since my kids and I had so much fun in 2005 doing a lemonade limeade stand, I thought it would be fun to do again in 2006 ... but step up the technology. I have three D-Link DCS-6620G wireless webcams from my halloween decorations and christmas lights ... so I figured I should put 'em to use here. X10 Powerline technology is used to control the various "zones" and allow you to turn them on and off in real-time. Yes, you (and anyone else on the Internet) can toggle the rotating cooling fan, make that Rainier Beer Sign light up, and even light up that groovy lava lamp. For the techies out there, the video feed is rebroadcast via a 100 Mbps web server (rather than a direct connection to my house), so there is quite a bit of bandwidth available, especially since I'm doing 3-second jpeg updates (typically about 50 KBytes) rather than streaming video. Back-end is a buncha home-grown Perl code along with the nifty CGI::AJAX module. There is a front-end software rate-limiter so that the X10 hardware doesn't get overwhelmed due to its 1-2 second latency ... daily data is shown in the X10 Controls toggled ### times (### tries) line. This is load balanced across several Linux/Apache servers using mod_perl and CGI::AJAX so there is a lotta scalability and therefore should be able to handle a significant number of visitors.

2006/06/04: I tossed a "Hulk'in Limeade sign in the front yard along with some lights that are also under X10 control. Had to fiddle with the light bulbs to get a decent exposure, but this is about as good as I can do. It provides some lights and color to the view of my front lawn/street which otherwise would be really boring & dark at night ... and I really don't want to put 26,000 christmas lights out there until December! ;-)

2006/06/05: My wonderful wife Wendy (who puts up with all of this) picked up 3 bags of limes, a large package of sugar (both now next to the "stand" in the basement), and two gallons of "Tony the Tiger" Orange Juice (we also sell that) at Costco - total cost was $27. I'll start making extra ice later in the week, so hopefully we don't have to buy any of that. The Jose Tequila bottle is almost empty so I'll have to buy another for the "big kids" that stop by Saturday. I picked up the Lava Lamp and Lite-Brite two days ago at the neighborhood garage sale for $3 apiece ... and I borrowed the "Lemonade Stand" from a neighbor - told their kids they would get free limeade this Saturday. Oh yeah, those D-Link DCS-6620G webcams (which could use some work in the auto-focus department - or at least give me manual control - an example and I wish it would be this tight) run almost a grand apiece, but I had them around, so not an expense for the lemonade stand! ;-)

2006/06/08: I just remembered that other neighbors were selling some Colorado Rockies (baseball team) cups at that garage sale. These would be perfect for the large limeade's ... so I called 'em up to see if they hadn't gone for the selling price of 50 cents/sleeve ... and they had 5 sleeves left that they donated - NICE! I picked up some small dixie cups at the store (on sale for $5) and also a fresh half gallon of Jose Tequila for the "big kids" - that expense is out of my pocket. Thanh from Texas donated $101 and there was also a matched $50 donation from Philipp from Germany (total so far is $221 for charity) ... so they quality for YOU NAME IT!!! and Thanh requested a $100 glass of Limeade - you got it!

2006/06/09: Philipp's YOU NAME IT!!! was a picture of Captain Copyright saying the Hulk'in Limeade Stand has to be shut down because we are using the Big Green Monster - heh, heh! ;-)

2006/06/10 - 0800: A bit breezy this morning with slight chance for severe thunderstorms this afternoon ... so possibility we might have to re-schedule to next week. I'll update this page in a few hours with how things are looking here in the Republic of Boulder, Colorado.

2006/06/10 - 1100: Winds haven't increased, but a few more clouds on the horizon, but OK so far. Inflatables are now out on the front lawn and you can blow 'em up and/or let the air out of 'em. Wife just called to say kids are having a great time at town fair and should be home around noon.

2006/06/10 - Biker Dudes/Power Rangers: Some stills from the webcams themselves show that the biker dudes, despite looking like Power Rangers, looked ready to "move in" on the Blue Heron housewives. Video footage available from webcam1 and webcam3 and the later caught some U-Haul guys who came by for some refreshing limeade. BTW, the biker dudes were super nice guys who had put a 100+ miles on their bikes driving around ... and were very generous with their donations. In fact, one was going to write a check for $100 for Celiac Disease Research, but I asked him instead to donate online directly to the University of Maryland - at least this way he'd get the tax deduction receipt - and he subsequently did that night.

2006/06/10 - Slamming Tequila: So as we were closing up shop, I figured it would be OK to take a big swig-o-Tequila. I first had to make sure the coast was clear and then I took a big swig - what a reaction! Here's the entire time-lapse sequence.

2006/06/10 - Complete Time-Lapse Videos: Complete time-lapse video of the Hulk'in Limeade Stand from: webcam1 - webcam2 - webcam3. There's a little bit of frame-jump as I PTZ'ed occasionally ... plus we had to move webcam1 when the neighbor's sprinkler fired up (see around 1515 in webcam3 footage). Dirk and I wave goodbye in webcam2 at the end of the day as we do the final cleanup caught by webcam1.