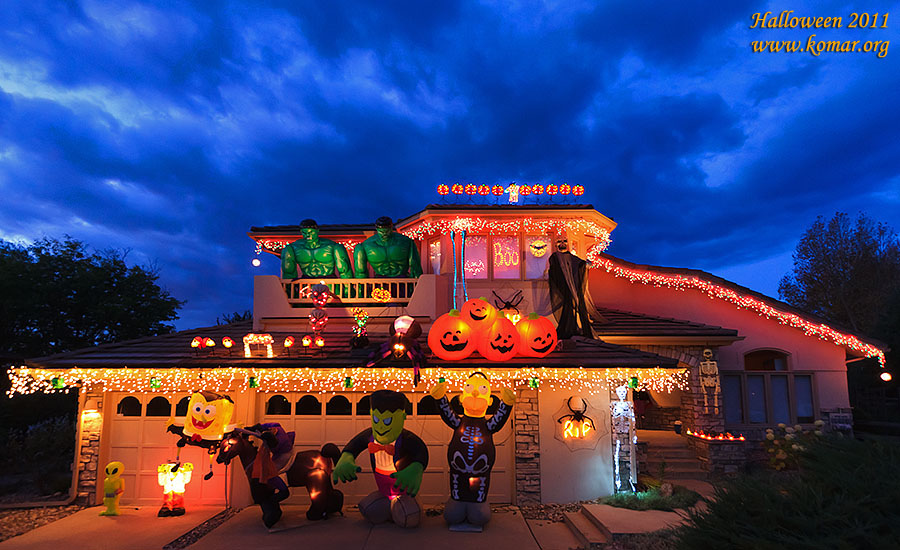 The 2007 Halloween Decorations & Lights are over:

Check out the Halloween Blog to see what Puny Humans said about Hulk and chime in yourself - ©2002-2007 www.komar.org

2007_09_01: For reference, here is the halloween 2006 webcam updates and it should be a blast again in 2007. I've re-enabled commenting on the Halloween Blog which has more extensive play-by-play than the summary here.

2007_09_02: As noted at the top of the page, the Controllable Halloween Decorations for Celiac Disease raises awareness and encourages people who enjoy the light show to donate to the University of Maryland. My two kids have Celiac so this is personal for me. Read more here and consider adding to the over $17,000 raised so far.

2007_09_03: My neighbors have already put out their Halloween Decorations as can be seen in this webcam closeup - WOW!

2007_09_05: I continue to use Wind Power for my electricity - wonder how many times I'll be asked this year where the windmill is on my property! ;-) What actually happens is you pay an extra surcharge (about $1 per 100 KWH) on your electric bill which goes to Colorado wind farms. My electric meter spins pretty fast when my thousands of holiday lights are on, so I hope those windmills can keep up! ;-) Along those lines, the holiday display is again carbon neutral (Al Gore would be proud!) as I will make a donation to cover twice the estimated 2 MegaWatt-Hours of electricity that will be used.

2007_09_08: At a garage sale this morning, I picked up these giant inflatable Colorado Rockies Baseballs - they were actually commissioned/used by the team. Debating how to work those into the holiday display.

2007_09_15: I'm going to try to get another year out of the D-Link DCS6620G wireless webcams. There are a few more hot pixels on 'em ... plus one has a broken gear tooth, so I can't do vertical panning unless I move it manually - that will be in the office. The D-Link DSC-6620G is a nice (not cheap) webcam, but the image quality could be better if I could just have a little more control over the webcam exposure and focus - here's a summary of the D-Link issues. Any techies out there have any suggestions on how to improve that?

2007_09_17: My holiday webcams have been fairly popular over the years, so for the geeks out there, the configuration this year is three dedicated servers running Linux/Apache2/mod_perl. One web server will handle the main halloween decorations webcam (and X10 control panel) with the other two web servers handling image refreshes for each of the three webcams. Yea, for maximum load balancing of this real-time application I could add one more server. Each web server has a 100 Mbps connection, so the combined throughput is 300 Mbps powered by a total of 8.8 GHz of CPU power with 5 GBytes of RAM - bring on the slashdot effect!

2007_09_27: Put up first strand of lights on the roof - watch the scary halloween movie ... and more halloween decorations will be going up in the next few days.

2007_10_05: Turned on the webcams and X10 controls yesterday and as expected, there were a couple of misc. teething issues the first few days. The X10 Super Socket on Zone-4 blew out ... so I'll have to replace that. Looks like the Fan Blower on the Skull stopped working - will check tomorrow. A coding error wiped out the IM logs for the first two days - added better error checking along with several other very minor coding fixes. Overall, this is by far the smoothest start to the holiday season I've had. And oh yeah, I still need to put up more lights before the cold, rainy weather comes on Sunday.

2007_10_08: Fan Blower on Skull was unfixable, so Christmas Elmo donated his and after some Open-Fan Transplant Surgery the Skull is back in action ... and it's a stronger fan too! Gusty winds on Saturday knocked down two of the witches on the balcony and I need to fix/add a few other things (most notably the Haunted Office), but overall, halloween 2007 is looking good!

2007_10_14: Finished up the Haunted Office which ended up looking just a bit spooky! Had some rainy weather over the weekend - webcam2 view - so this caused the main garage GFI to trip several times ... but otherwise, the whole system continues to work pretty smoothly. Have had several charity donations, so the total raised for Celiac Disease Research is now over $18,000.

2007_10_18: Updated the halloween maps page with data from the first half of the month - web surfers from 78 countries have come by so far. Got some pictures of some "neighborhood stalkers" who come by every day - 1 and 2. Had to do minor fixing of Frankenstein ... and UPS should deliver the HULK'in SURPRISE today - heh, heh! ;-)

2007_10_21: A cold front moved in and the first sprinkling of snow showed up this morning. More importantly, Hulk's "long-lost twin brother" showed up (via UPS) and there are two of 'em on the balcony now - Whole house picture and closeup of the Hulk brothers! ;-)

2007_10_28: My hometown baseball team, the Colorado Rockies, made the World Series. Unfortunately, they got swept in four straight games by the Boston Red Sox. Even despite having the monster baseballs out in the front yard for good luck - darn! ;-)

2007_10_31: Had an awesomely fun Halloween Night as hundreds of trick-or-treaters stopped by the house ... time-lapse footage of the zaniness available on the halloween movies page.

2007_11_02: I left the halloween webcam running for an extra day, but have now shut everything off and taken down all of the Halloween Decorations ... time to get ready for Christmas! ;-)